During August 2016 Training of Trainers were conducted for Village Enterprise Facilitators (VEFs) and district staff in Balkhab District of Sarepul province.

In this training 18 VEFs and 3 district staff participated and the following modules were delivered within 7 days:

Also a total of 4,339 SHG members have completed different vocational skill training in below mentioned districts:

At the same time access to tools is very essential in order to start or expand an enterprise; therefore during the month of August a total of 543 members received access to different types of enterprise start up kits as follow:

During the month of August a total of 815 jobs have been created by internal loans and enterprise startup kits. 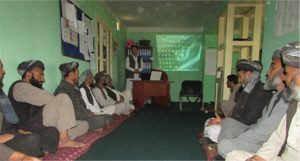 The event started by a presentation from district staff explaining goals of HiH Af, importance and role of associations on the top of SHGs, importance of access to credit through savings and utilizing domestic products and understanding local market demands, followed by a speech from Mr. Fazul Ahmad representative of Gosfandi district Agriculture Department. He said that “HiH Af is implementing a fundamental project, it changes and promotes life of the most vulnerable and marginalized people with focus on women”. He also encouraged rural women to actively take part in the project and promised his continues cooperation.

The meeting concluded after a question and answer session where participants asked for clarification about associations that were answered by the relevant staff.